Go Ahead and Record the Police: First Circuit Court of Appeals Affirms 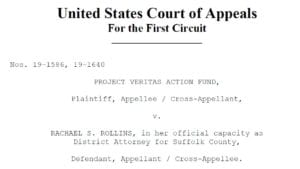 The First Circuit Court of Appeals has held that the criminalization under Massachusetts state law of secretly audio recording police while they perform their duties in public spaces is unconstitutional. The ruling, Project Veritas v. Rollins, was issued yesterday (December 15, 2020) and the implications will be immediate: police officers can no longer arrest people for recording police interactions, open cases for doing this must be dismissed, and people previously convicted for these offenses can seek to vacate those convictions. (Give me a call if you are one of those people)

Massachusetts makes it a crime to record another person’s words secretly and without consent. Mass. Gen. Laws ch. 272, § 99 (more commonly known as the “wiretap statute.”) This type of law is not unique to the Commonwealth but unlike other states with similar prohibitions, our wiretap statute does not recognize any exceptions based on whether the person being recorded has an expectation of privacy in what is recorded. As a result, people in Massachusetts are threatened with arrest, arrested, and prosecuted for using a smartphone to quietly record a police interaction from a safe distance.

This case is the consolidation of separate challenges to the Massachusetts wiretap statute. In one case, civil rights activists who have secretly recorded police actions in public in the past sought declaratory and injunctive relief for future recordings noting correctly that others have been prosecuted for the same conduct. A second case initiated by the infamous Project Veritas sought broader relief and they did not prevail.

The Court wrote that “a citizen’s audio recording of on-duty police officers’ treatment of civilians in public spaces while carrying out their official duties, even when conducted without an officer’s knowledge, can constitute newsgathering every bit as much as a credentialed reporter’s after-the-fact efforts to ascertain what had transpired.” The Court concluded that the wiretap statute was unconstitutional as applied to the secret recording of police performing their duties in public because it was “not narrowly tailored to further the government’s important interest in preventing interference with police doing their jobs and thereby protecting the public.” The Court specifically noted that “despite a record that does little to show how secret, nonconsensual audio recording of police officers doing their jobs in public interferes with their mission, [the wiretap statute] broadly prohibits such recording, notwithstanding the myriad circumstances in which it may play a critical role in informing the public about how the police are conducting themselves, whether by documenting their heroism, dispelling claims of their misconduct, or facilitating the public’s ability to hold them to account for their wrongdoing.”

The important caveat when recording the police is that the recording must be done in a way that does not interfere with what is going on. So please don’t swoop in to get the perfect shot. Stay back, record, and definitely share recordings that show something important.

← Searching “DUI Attorney Boston MA” Should Lead You To Keren Goldenberg
→ Boston Criminal Lawyer Explains: What To Do When Arrested