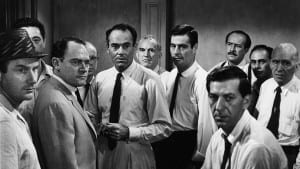 I’ve been thinking a lot about jury nullification recently because it has come up in my practice and in the news. Jury nullification occurs when a jury returns a verdict that is contrary to the letter of the law. In a trial, the jury listens to the evidence presented and decides what evidence to believe. They are then instructed on the law by the judge and told to convict only if they find that the government has proven its case beyond a reasonable doubt. But sometimes a jury will go against the law and either acquit in a situation where the evidence clearly supports a conviction or convict even though the prosecutor has not proven its case beyond a reasonable doubt. For example, a jury might hear irrefutable evidence of the accused possessing drugs and choose to acquit based on sympathy or a belief that drugs should not be outlawed. As for the other kind of nullification, there may be a situation where the jury dislikes the accused so much based on how he looks, who he hangs around with, and how he lives his life that they ignore evidence that might justify an acquittal. For example, the jury might hear evidence of gang members involved in a murder but little evidence that the person on trial, who was part of the gang, was actually involved. The jury might convict the accused based largely on their dislike for him and his association with people involved in the murder even though the evidence did not show beyond a reasonable doubt that he had a role. While most people talking about jury nullification are referring to acquittals based on conscience and beliefs that are contrary to the law, the other type of nullification is alive and well in our court system.

When a jury acquits despite evidence supporting conviction, there is no redress for the prosecution. Not guilty verdicts cannot be overturned on appeal; they are final. Jurors can never be questioned about their motivations to acquit nor can they be punished for their verdict. If the nullification results in convictions, there are limited circumstances that an appeals court will reverse the conviction because the evidence is so obviously lacking. This only happens in the most extreme cases because appeals courts will defer to the jury’s verdict and review all evidence in the light most favorable to the prosecution.

In Massachusetts and all other jurisdictions in the United States, jurors are not instructed that they can nullify a case. In fact, when a potential juror for a trial that I did last week proudly told the judge that she believed in jury nullification (specifically, the ability to acquit if one feels that the law is unfair or unjust – no one ever brags about believing in the other type of jury nullification), it was impressed on her that in order to be seated as a juror she needed to follow the judge’s legal instructions. If a potential juror indicates that she will not follow the judge’s instructions then she would be disqualified from sitting on the jury. During the trial, neither the defense lawyer nor the prosecutor can advocate for nullification in her arguments to the jury and doing so would almost certainly result in a mistrial (and getting reamed out and sanctioned by the judge). While no one can stop a jury from nullifying, they would do so without having received any instruction or guidance from the court.

The jury nullification issue came up again last week when I saw an article that I posted on Twitter (shameless plug: follow me @GoldenbergLaw) about Keith Wood, who stood in front of an Michigan courthouse passing out pamphlets to people walking by which informed them of the right of the jury to nullify if they believed that the law was unjust. While this activity certainly annoyed the judges and prosecutors in the building, the situation took an astonishing turn when Mr. Wood was charged with jury tampering. It seems a far stretch to call his activity jury tampering since relatively few people who walk in front of a courthouse are jurors but the judge did not hesitate to set a high bond nonetheless. This charge is an obvious infringement of the Mr. Wood’s right to free speech under the First Amendment and it seems very unlikely that his prosecution would survive a constitutional challenge.