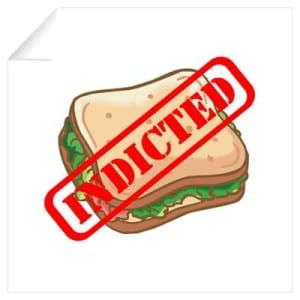 In one of my favorite books, The Bonfire of the Vanities, author Tom Wolfe quotes New York State chief judge Sol Wachtler who said that “a grand jury would indict a ham sandwich, if that’s what you wanted.”

Yesterday an Ohio grand jury opted not to indict Timothy Loehmann, a Cleveland police officer, who shot and killed 12 year old Tamir Rice who was playing with a toy gun in a park. The officer responded to a dispatch that a black male was in the park pointing a gun at people. The entire incident was caught on a surveillance video; one can see the police cruiser approach Tamir and Loehmann immediately jump out and shoot him without delay. The officer claimed that he thought he was going to be shot by Tamir, who was big for his age.

In obsessively following the comments for the past two days on Twitter, I saw that many people did not understand the role and function of the grand jury. Since I have talked about grand juries with hundreds of clients over the years, allow me to explain:

A grand jury is a group of citizens chosen from the community to screen criminal accusations and decide whether an indictment (criminal charge) is warranted based on a review of the prosecution’s evidence. The jurors must find that there is probable cause to believe that a crime has been committed by the accused. While the rules in different states vary, typically 23 jurors sit and a majority must vote in favor of issuing an indictment. Grand juries do not decide whether the accused is guilty or not guilty; they determine whether there is enough evidence to bring charges against the accused in court. Grand juries are convened by the court but are under the supervision of a county district attorney, state attorney general or federal US attorney.  The court has limited involvement with the grand jury the jurors are seated and the prosecutor’s office runs the show. The court generally does not get involved until indictments are issued and the accused appears in court for his/her arraignment (also known as a bail hearing).

All states have some provision in place for grand juries and about half the states actually use them, including Massachusetts. Article 12 of the Massachusetts Declaration of Rights establishes a right to grand jury presentment for anyone facing a potential state prison penalty (which means in practical terms that the person is accused of a felony that will be litigated in the superior court). The right to grand jury presentment in federal court is established by the Fifth Amendment. The general trend outside Massachusetts is to have a trial court judge, rather than a grand jury, function in the screening role of deciding whether there is sufficient evidence to establish probable cause. The attraction of having a preliminary hearing in court is that it is open to the public while grand jury presentments are done in secret and not available for the public’s review. The appeal of grand juries at this preliminary stage is that this important screening function is given to representational members of the community rather than a single judge.

Probable cause is a very low standard. All that must be found to support the indictment are reasonable grounds that the suspect committed a crime. Thus the ham sandwich quote, which is well known among both criminal defense attorneys and prosecutors. It is for the trial jury to do the tough job of determining guilt or innocence; the grand jury is just looking for a reasonable basis for the proposed charges.

The chatter among the people who I follow and converse with on Twitter was that grand juries should be abolished in light of perceived injustice, racism, and over-protectionism of police officers. Remember that Christopher Manny, the officer who choked Eric Garner to death on video, and Darren Wilson, the officer who shot Michael Brown fatally, also were not indicted when their cases were presented to grand juries. Unfortunately, racism and police protectionism don’t miraculously disappear when a judge makes the probable cause determination. I actually like the concept of members of the community serving this screening function which is intended to protect the public from malicious and baseless prosecution. However, transparency is paramount in cases like these when the public’s confidence is shaken.

The secrecy of grand jury proceedings is a matter of policy and is not proscribed by the constitution. The purpose behind this policy is to save the suspect from notoriety until probable cause is found and to keep the grand jurors from being influenced by outside sources. Given that the cases that I referenced above were widely covered in the media and on social media long before the grand jury heard the cases, it seems that making an exception to the secrecy rule would be warranted. I read today that Governor Brown of California signed a bill into law that would prohibit cases in which a police officer kills a civilian from being screened by a grand jury. I would suggest that the grand jury process doesn’t need to go; the secrecy rule needs to be changed for high visibility cases. The transcript of the proceedings should be made available to the public after the jurors have voted whether to indict so that the public can know what happened.

So the final question that readers might have is “why do grand jurors repeatedly protect the police when they kill?” After all, everyone knows that they indict ham sandwiches! To be clear, grand juries do what the prosecutors want them to do. They will rubber stamp a request for an indictment only if they are asked to do so. It is my opinion that in these police cases the prosecutor stops prosecuting and takes on the role of defense attorney for the accused officer. In the presentment, which normally just covers the basis for charging the accused with a crime, the prosecutor makes sure that the grand jurors hear evidence that would lead them to believe that the officer’s actions were justified and to sympathize for his predicament. This simply is not done with people accused of crimes who are not police officers. I am very familiar with grand jury presentments because as the lawyer of the accused, I get read the transcript after indictments have been issued. No prosecutor has ever presented evidence that is favorable to my clients. Massachusetts requires that exculpatory evidence be presented to the grand jury (which is not required in all states) but certainly does not require showing how the accused may have incorrectly perceived himself to be in danger and therefore justified in acting in self-defense. Raising the issue of self-defense is left for me as the defense attorney to do at trial. I don’t get an assist by the prosecutor before the grand jury. DA’s prefer to hand over the  screening to grand juries when an officer is facing charges because when the grand jury decides not to indict, the DA gets political coverage. The DA can say (and likely be believed) that the decision by the grand jury was out of his hands but be sure that this was the result that he wanted and made sure would happen.

A prosecutor’s office works in partnership with the police departments in the office’s jurisdiction. They must rely on each other. There is an inherent conflict of interest when the prosecutor’s office prosecutes a police officer who has served in that jurisdiction. The prosecutor risks alienating his/her office with the entire department and therefore has an incentive to protect the officer. Assigning a “special prosecutor” who is not from the office and does not work with the accused’s department would be an improvement, but only if the special prosecutor is someone who does not reflexively protect police officers and does not disregard black lives. That is very hard to find. I have seen special prosecutors assigned in very few cases and have not been impressed. If you have any questions about a position you are in, please call me, I can help.