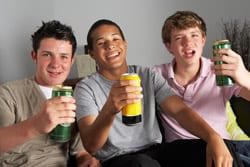 Even if your son or daughter is too young to drive or does not have a driving permit/license for other reasons, s/he is increasingly likely to be ordered to submit to a breathalyzer test by a police officer. A breathalyzer, if you are not already familiar, is a breath testing device that estimates the concentration of alcohol in one’s bloodstream from a breath sample. If your teenager arrives to his or her prom and is suspected of having consumed alcohol, or if the police break up a party where they believe underage kids have been drinking, your child will likely be told to submit to this type of testing. Like all people told to submit to breath testing, your child has the right to refuse to take the test which is in their interest if they have consumed any alcohol since any result above 0.0 can result in a criminal charge. It may be hard to believe but in Massachusetts (and many other states) being a Minor in Possession of Alcohol is a criminal charge. A conviction would result in criminal misdemeanor record, a fine, and a 90 day driver’s license suspension.

If your child refuses the breathalyzer, the police could still prove the offense by other means such as the smell of alcohol on his breath or drunken behavior. However, a skilled criminal defense attorney would have a much easier task defending against this type of evidence compared to a breathalyzer reading of anything over 0.0. Be aware that refusing the breathalyzer at a school event, such as the prom, could result in suspension or other disciplinary measures which must be outlined in the school’s student handbook (or its equivalent) to be enforced. The best advice to give your child regarding breathalyzers is that they should call you immediately and wait until you arrive before making any decisions regarding taking or refusing the test.

If your teenager gets a notice of a Clerk Magistrate’s hearing regarding a Minor in Possession of Alcohol charge, please call my office to set up an appointment. I have successfully convinced Clerk Magistrates in various courts not to issue charges against my young clients accused of this offense.