Prostitution or Human Trafficking? A look at the available evidence against the Florida massage parlor where Robert Kraft visited 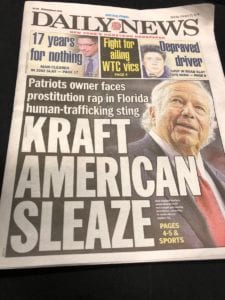 Unnecessary vilification by a NY publication

By now everyone in New England (and beyond) has heard that Robert Kraft, the loved and hated owner of the New England Patriots, has been accused of soliciting a prostitute in Jupiter, FL. News reports suggest that he frequented the Orchids of Asia Spa in Jupiter FL on two occasions and received more than just a massage. The response on social media was predictable: Patriots fans express disbelief or disappointment; people who hate the Patriots are rejoicing. The other reactions involve the propriety of police spending considerable resources on investigating prostitution. People who view prostitution as a consensual contract between two adults see these stings as unnecessary and harmful. People who believe that such a massage parlor could be a front for human trafficking see these investigations as necessary and commendable. News media have been very quick to suggest that there may be human trafficking involved so I went to the best publicly available source: the arrest report for the owner of the Orchids of Asia Spa.

To be clear, I view prostitution as an unfortunate but consensual agreement between two parties (assuming that all people involved are old enough to enter such an agreement). I believe that people who engage in prostitution are victims of dire economic circumstances and likely feel they have no better alternative. Human trafficking or sex trafficking, on the other hand, involves involuntary servitude by individuals forced to participate in sexual acts or to appear in pornography.  Human trafficking is forced labor; prostitution is not.

In this case law enforcement agencies claim that they were doing a multi-agency investigation into human trafficking in communities throughout Florida. Jupiter Police received a tip about Orchids of Asia Spa suggesting that it was offering more than massages at its establishment. The investigator did an online search and found some reviews of the spa where reviewers stated that they offered “rub and tug” services. Jupiter Police surveilled the business for 6 days in early November of 2018 and observed that the establishment stayed open very late and only male patrons went in and out of the business. Detective Sharp of the Jupiter Police asked a health inspector to conduct a seemingly routine inspection and the inspector observed two rooms in the back of the business that appeared to serve as living quarters. Towards the end of the inspection an employee was seen throwing out a small grocery-style bag of garbage into a dumpster. Sharp wrote that “[b]ased on my training and experience, it is known that illicit massage business parlors commonly discard their trash inside small plastic grocery style bags.” Inside the bag he found torn up papers that when pieced together appeared to be a spread sheet recording payments and tips for particular service providers. A later dumpster dive led to another small grocery bag with napkins believed to have seminal fluid on them.

In January of 2019 Jupiter Police returned to the business and stopped male patrons leaving the business. Likely on a promise not to charge them, the police questioned four patrons who admitted to getting hand jobs from employees of that spa.

Several days later Jupiter Police obtained a search warrant that authorized video monitoring inside the business. The New York Times interviewed the owner of a nearby business who recalled that around this time the police evacuated the Spa stating that there was a bomb threat. It is fair to assume that this was when these hidden cameras were installed. The cameras were installed INSIDE the treatment rooms and the police report describes with uncomfortable detail the sex acts performed on 26 unsuspecting patrons by equally unsuspecting employees. Most patrons received hand jobs and a few received blow jobs and anal stimulation. The 26 men are not named in the report but we can assume that Robert Kraft was one of them. The police report indicates that 26 men will face charges for paying for sexual acts. The owner of the Spa and the manager will face various charges relating to pimping and running a prostitution house. There is no indication in the report that I reviewed that other employees are being charged but that information may be contained in another report.

Several years ago I represented a man who was questioned by local police as he left a hotel room were he got more than just a massage. The officer promised not to charge him if he was forthcoming and my client admitted to receiving a hand job in the hotel room. Later he was charged with solicitation. While the charges were pending he received a summons to testify before the grand jury into a sex trafficking investigation by the Massachusetts Attorney General’s office. I contacted the Assistant Attorney General and demanded full immunity before my client testified knowing full well that they would have enough other witnesses available who were not demanding immunity. As predicted, they proceeded without my client. The local charges were ultimately dismissed with some community service. This is what happens when the crimes of prostitution and sex trafficking collide: multiple law enforcement agencies tripping over each other to prove their cases.

Some time ago I represented the owner of a massage parlor who had the misfortune (for someone in her line of work) of being Asian which led to multiple law enforcement investigations into her business. They would not leave her alone. In the case I worked on, a police officer came to the salon for a massage and claims to have negotiated payment for a hand job with an employee but left before getting the service. My defenses for my client were that she didn’t know what her employee might be doing but also that the police officer admitted to communicating to the Chinese-speaking employee using a translation app on his phone. Have you ever tried to have a conversation using Google Translate? Would you trust that interpretation in a court of law? The charges against my client were dismissed. The videos inside the rooms at the spa in Jupiter obviously provide much more compelling evidence but are you comfortable with that level of intrusion in order to catch a few prostitutes and their customers?

I represented an individual who was involved in running a high end prostitution service (because it was high end it was called an “escort service.”) As soon as the police moved in sex trafficking allegations were made to the bewilderment of the people running the business. The struggle in representing individuals charged with Human Trafficking is the hysteria that accompanies such charges. High bail is set; jurors are horrified by the charge itself and one must get them to see past the hysteria and recognize that credible evidence shows nothing more than prostitution. Forceful examination of the incentives for the workers to allege trafficking is always central to the case.

Now that I’ve done a deep dive into the evidence made public on the Orchids of Asia Spa let’s talk about prostitution and human trafficking. I’m going to discuss Massachusetts law and not Florida since Massachusetts is where I practice.

People who hire or attempt to hire a prostitute are commonly referred to as “Johns” and have committed the crime of Soliciting for a Prostitute in violation of Mass General Laws Chapter 272 Section 8. Soliciting for a prostitute is a misdemeanor that is punishable by up to 2.5 years in a house of correction and/or a fine of at least $1000 but no more than $5000. That person may also face charges under Chapter 272 section 53A with the same potential penalty. If the prostitute is under 18 the charge is a felony and the potential penalty is greater: up to 10 years in state prison or up to 2.5 years in a house of correction and a fine of no less than $3000 and no more than $10000.

A person who offers to perform or performs prostitution services is violating chapter 272 section 53A which prohibits Engaging in Sexual Conduct for a Fee. This is a misdemeanor that carries a sentencing or up to 1 year in a house of correction and a fine up to $1000 or both.

If you or a loved one has been charge with solicitation, prostitution, “pimping,” running a prostitution house, or sex trafficking please contact me for an appointment to discuss the case.